The first Qt for MCUs release of 2021 is out! Download it to get the latest features and create ever lighter yet impressive-looking Qt applications for microcontroller-powered devices.

Newcomers can get a free evaluation here, while others can run the Qt Installer to update to the latest version.

The full list of changes included in version 1.7 can be found in the changelog in the online documentation. Continue reading for more information on the content of this release.

The Application and Screen QML types have been added to enable driving multiple display outputs from the same Qt for MCUs application. Note that the platform port must be adapted to expose the different screens to the Qt Quick Ultralite engine.

More details on these APIs can be found in the multiscreen example.

New QML APIs have been added to give you more control over the way graphics are being processed by the hardware. By slicing up your graphical user interface into multiple layers with different characteristics (e.g., color depth, refresh interval), you can optimize the CPU, GPU, and memory usage of your application.

Let’s take the screen below as an example: 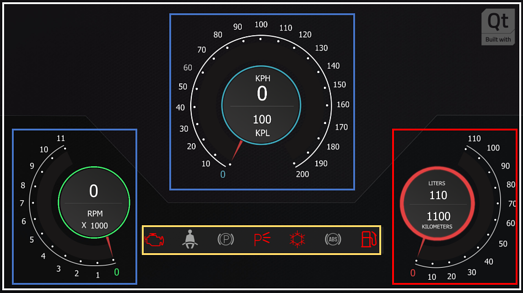 When GUIs are designed and organized in such a way, framebuffer requirements can be significantly reduced, while ensuring top-priority layers are smoothly animated by reducing the frame rate of lower-priority layers.

You can read more about performance optimization using layers in this documentation page, and find a complete example in the examples/layers directory of the Qt for MCUs SDK.

In 1.7, layer APIs are implemented for Renesas RH850-D1M1A and for desktop (for development and testing purposes). More reference platforms, starting with the automotive ones, will include layer support in upcoming releases.

Perspective transformations on 2D objects AKA 2.5D or pseudo-3D

For those not familiar with the term, 2.5D refers to the use of graphical projections to make two-dimensional objects appear as three-dimensional. With Qt Quick Ultralite, this can be achieved by applying a Matrix4x4 transform to Image, Text, or StaticText elements.

To get an idea of what type of user interface you can build using this technique, have a look at the video below: The source code of this example is included in the SDK under the examples/perspective_transforms directory.

The next release is planned for April and will introduce new MCU platforms and more options to reduce RAM footprint. Stay tuned for more information.